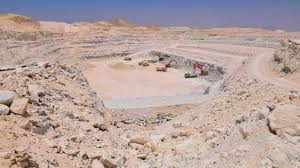 23 November، 2020 Faten AbydosEconomic Ores, New News, Productsaccording to the method of its formation:, Alabaster, Gypsum, Its uses:, Stages to remove impurities:, The dangers of gypsum for construction, The distribution of gypsum in Egypt was as follows:, There are two types of gypsum0 Comments

Gypsum is one of the raw materials available in abundance in the earth and it is the most sulfuric mineral spread in nature in one of its mineral forms or sedimentary rock and it interferes with the mineral anhydrite (anhydrous calcium sulfate) and is present with dolomite, clay and limestone and is gray or white in color and tends to reddish sometimes and it may be Its presence on the surface of the earth or at depths of up to 350 m.

Plaster or gypsum is a solid material made of calcium sulfate dehydrate.

Its name is  Anhydrous calcium sulfate CaSO4.2H2O, which falls under this name:

Impurities such as calcium carbonate (CaCO3) and silica or sand (SiO2).

gypsum deposits are spread in large quantities in the rocks belonging to the Middle Miocene era along the Red Sea coast in Jamsa, Jabal Al-Zayt, and Ismailia, along with their spread on both sides of the Gulf of Suez, and on the western side of the Red Sea from southern Hurghada to Ras Banas, and these sediments are available on the surface. It is easy to use.

In addition, there are other deposits of gypsum on the northern coast in the areas of al-Gharbaniyat, al-Hammam and al-Amid, Alam al-Salt, al-Alamayn, and al-Barqan, and large quantities of gypsum are available in Ras Stadium in South Sinai, and other less important areas are: Persia, Al-Buqirat and Al-Tawil in the Fayoum region and east Beni Suef The Egyptian Company for Gypsum, Quarries and Marble produces gypsum from the regions of al-Ghurbaniyat, al-Amid and Hammam for agricultural purposes, and from the areas of al-Balah for construction purposes. The Sinai Manganese Company also produces gypsum from the head of a stadium, in addition to some private sector companies. The production of gypsum in 58/86 reached about 0.64 million Cubic meters valued at about 14.74 million pounds, and the production in the year 90/91 reached about 0.83 million cubic meters, with a total value of about 20.96 million pounds. The Red Sea region is considered one of the most important areas of gypsum production for industrial purposes in Egypt.

The distribution of gypsum in Egypt was as follows:

There are two types of gypsum, according to the method of its formation:

* Gypsum: a fine-grained impure ground sediment mixed with sand and clay.
* Parallel fibers: They are many cracked gypsum blocks found in the form of various fibers characterized by a pearly shine.
‌ * Rock gypsum: a cohesive, flaky or grainy type, often impure.
* Selenite: It is one of the finest types of gypsum as it consists of monocrystals that are completely transparent and slightly chapped
‌ * Alabaster: is made of fine-grained clumps.

After extracting the gypsum (natural ore), either by using explosives or automatically.

– Surface mining method: Open drilling methods are used after removing the surface cover to avoid deformation of the layers, taking into account the stability of the slope and the small vertical distance in the open pits and making controls during its extraction and analyzing gypsum samples at each level.

– Sub-surface mining method: It is the use of the pillars and chambers method, which is the most prevalent in mining, as it requires abundant reserves of ore and that it be of high quality and within reach of the markets requesting it, the availability of lime processing unit, cheap transportation fees and the ability to compete with alternative products.

In summary, the gypsum industry is based on: Breaking the extracted materials into small pieces in two stages:

– Pre-crushing to reduce size into small pieces.
‌-Secondary crushing to become the size of lenses and stored in warehouses for sending to the roaster later.

The gypsum is extracted after being washed, sifted and impurities separated from it, and then it is dried and after that it is sent to roasting and placed in the oven at a temperature of 130 ° C and remains in the oven for long enough until it expels (3/4) of the water inside it where its chemical formula becomes (CaSO4.1 / 2H2O). CaSO4.2H2O + heat = CaSO4.1 / 2H2O + 1.5H2O

Then two types of plaster are excreted:

– Alpha gypsum semihydrated.
– Half beta plaster.
Where the two types meet in crystallization, but alpha gypsum is less reactive and soluble, so it requires a large amount of water and a longer period of time for solidification, and it is the most popular, used and productive.

After roasting, gypsum is sent to mills to be grinded according to demand and sent to special warehouses to be filled with special bags, after samples are taken from it and tests are conducted to find out the purity, solidification time, hammering strength, types of impurities and their percentage to be classified.

B- Drying by partially removing the water.

C- The mixture consisting of calcium sulfate double water and half aqueous crystallized in order to create an easy shape in order not to cause difficulties during manufacturing.

D- Grinding the product into particles of the size to be found.

E- Then, as a final stage, melting is subjected to that requires a large amount of water and a longer period of time for solidification and is the most popular, used and productive.

After roasting, gypsum is sent to mills to be grinded according to demand and sent to special warehouses to be filled with special bags, after samples are taken from it and tests are conducted to find out the purity, solidification time, pounding strength, types of impurities and their percentage to be classified.

The dangers of gypsum for construction

Its risks are very great as calcium sulfate combines with cement and thus (reinforced concrete) becomes very fragile with the passage of time, which leads to cracking of buildings. Therefore, it is advisable in the construction process to replace the gypsum with sulfate-resistant cement if the percentage of gypsum is (6% or less). (More than 6%) We recommend replacing it with soil with the use of resistant cement as well.

It has many positive uses, as it is used in medicine, agriculture, etc.

Plaster is used as a splint for broken limbs in order to help stabilize the broken bone in place so that the fracture heals and returns to nature, and after permission it can be removed.
It is widely used in construction and decoration industry.
It is used in the manufacture of chalkboards in educational institutions and others. 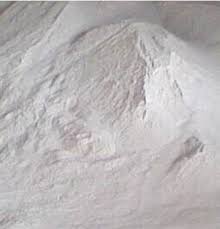 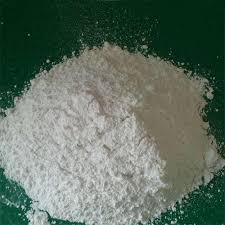 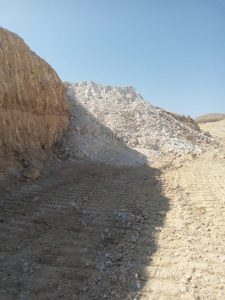 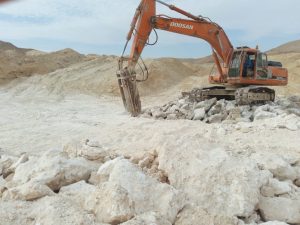